Laser cutting: what can it be used for?

What is laser cutting?

Laser cutting is a technology that uses a laser to cut materials. It’s typically used for industrial manufacturing applications, but smaller machines are becoming much more prevalent, opening the access point to small businesses, hobbyists and even some schools. Laser cutting works by directing the output of a high-power laser at a material to either cut through or burn the surface.

The rise of laser cutting

While there is no doubt that the original tools used for cutting are still incredibly useful, the demand for a process which would be more efficient and safer increased dramatically. Laser cutting has become so popular due to its speed, precision and the fact that it can be used for a greater length of time. It can also be used on a wide variety of materials, such as wood, glass, metal, plastic amongst others, although we focus on plastic, wood and paper.

We have experimented with laser cutting for different purposes.

These business cards were created for Gradino: they stand out and a number of people have commented that as the card is so distinctive, it is still on the wall several months later! 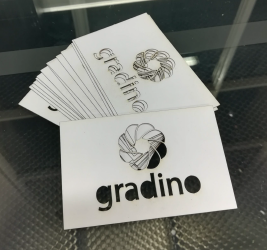 We experimented with wooden log slices at Christmas as card decals which could then be used for Christmas decorations. Using the laser, we were able to personalise these.

When we decided to print some short run custom t-shirts, we made the stencil using the laser cutter. This allowed us to be very precise and also meant we could quickly run off a few different stencils.

As well as these examples of laser cutting, we have produced a variety of different products, including customised notebooks, jewellery, wedding table centrepieces, pin cushions, a decorative family calendar and boxes for board games which were fantastic for space saving! 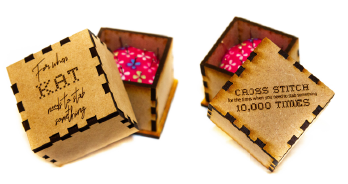 If you’re interested in any of these products, get in touch to find out how laser cutting could be used for your business.