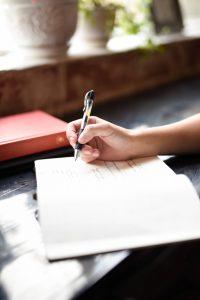 The Artist’s Way made its debut in 1991. In its pages, Julia Cameron and Mark Bryan share a 12 step program designed to ‘recover your creativity from a variety of blocks, including limiting beliefs, fear, self-sabotage … and other inhibiting forces, [and] replacing them with artistic confidence and productivity’. It sold millions of copies worldwide, so as a person who is both a huge fan of order and logic AND one who looks for inspiration in chaos, Kat has always been puzzled when people say, ‘I’m not creative’. This book opens our eyes to what might be going on in our brains. There is a huge range of impact: some people aren’t able to have a single idea while others will have an off day here and there. Kat was recommended this book by some good friends who all completed the 12 steps (some multiple times!) and, as a result, ‘recaptured their creativity’, ‘learnt about their brain’ and ‘felt free from the nagging voice’. As someone who would be the first to admit that voice is – more often than not – a hindrance, when I come across anything which could help us free ourselves from the limitations it puts around us, I want to shout about it.

In the introduction, it is suggested that we are all creative and that for those of us who struggle to see this characteristic within ourselves, we just need to learn how to let ourselves be creative. The program is incredibly interesting to read about, but one aspect really stuck with me: the morning pages. These are a daily ritual which require you to hand write three pages each morning. Three pages of what, though? What about those of us who are not born writers but are more visually creative?!

We know that the brain has two hemispheres – the left, responsible for logic, such as maths and science, and the right which performs creative tasks. In The Artist’s Way, the brain is divided into two similar camps called ‘logic brain’ and ‘artist brain’. Logic brain likes things to be ordered and likes understanding things. Artist brain is our more childish side. It likes putting different images, words or notes together and trying things out.

Very often, when we allow our artist brain free rein, our logic brain compares it to recognised images or texts and acts as the voice in our heads which tells us what we’ve done is no good. In The Artist’s Way, this is referred to as ‘the censor’.

In order to ignore that voice in your head which tells you that you’re not good enough, we use our three pages of writing to unclog our mental and emotional states. It’s highly likely that there will be days when you don’t feel like writing but the key is to just write anyway, and keep writing until you finish all three pages. What you write doesn’t really matter – just write down whatever comes to mind. It could be, “What am I am doing? It feels like I’m talking to myself and I don’t really know what to say!” to your plans for the day, a prayer, what you can see out of your window or how you’re feeling.

You do need to give your pages your uncompromised time, so try not to lose focus. It’s also imperative that nobody reads what you’re writing, not even yourself for at least the first eight weeks, otherwise you’ll become self-conscious and not necessarily be honest with yourself.

So why do we do this? Everything you’re writing down is your brain drain. It’s all the thoughts, worries or niggles which are preoccupying you and blocking your creativity. Once you’ve started removing this from your headspace, you’re able to find that most elusive of things – your own voice. Completing the morning pages teaches your logic brain to move out of the way in a similar way to meditation. Over time, you may realise that you’ve subconsciously identified your true feelings about something, what is causing that feeling and then what you can do about it.

If you’re interested in finding out more about The Artist’s Way or the morning pages, why not take a further look? Check out Julia Cameron’s website or pick up a copy of the Artist’s Way and let us know how you get on!